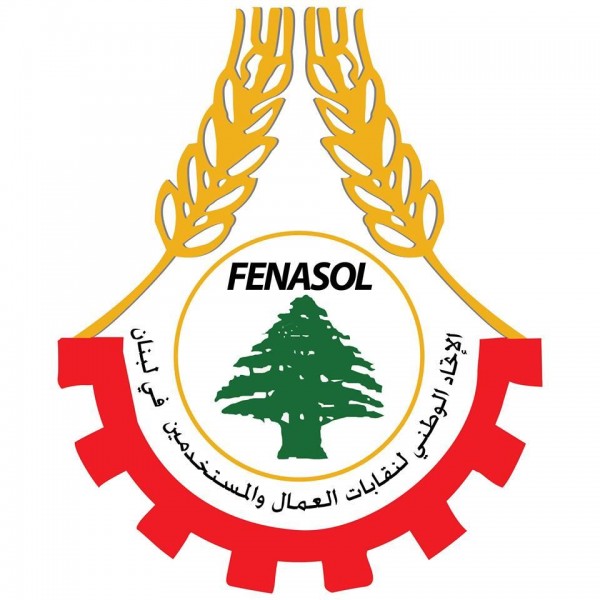 This Company has no reviews. Be the first to share your experiences!
Write a Review

Have questions? Get answers from Fenasol or Yelleb users. Visitors haven’t asked any questions yet.
Ask a Question

Location map Get Directions
Show Map
Expand Map
Wata Al Msaytbeh- Immeuble Samir Al Zouheiri- B.P: 733 Beyrouth – Liban , Beirut, Lebanon
Description
From the beginning of the organized trade union movement in Lebanon, that is, since the beginning of the last century. To this day, the march of the Lebanese working class has been difficult, thorny, and triumphant, as well as failures and failures.

The National Union of Trade Unions and Users in Lebanon (FENASOL) is a national democratic trade union organization which is a progressive progressive activist whose decisions depend on the positions of its trade union structures and its members.

The National Union is one of the oldest trade unions that participated actively and extensively in the struggle for independence and the defense of the rights of workers, especially immigrants, farmers and women. The name was changed to the current name of the National Union of Trade Unions and Users in Lebanon (FENASOL)

The National Union of Trade Unions has been at the forefront of labor rights defenders and in contact with migrant workers from Armenians and Kurds since before 1936 and today continues to work with domestic workers, migrants and others.

In 1944, the Union of Trade Unions and Users in Lebanon was formed. It included 15 trade unions and 12 union committees. At that time, Mustafa El-Aris was elected president of the federation and at that time was governed by the Law of Associations in the Ministry of the Interior. In September 1946, the Lebanese labor law was passed. He requested the reorganization of trade unions on the basis of the Labor Code and the creation of trade unions was subject to prior authorization from the Ministry of Economy.

On November 2, the Union office was broken into for the third time, Mustafa El Aris was arrested and a number of unionists were arrested

At the time, the National Union of Trade Unions comprised three trade unions: hotel and restaurant users, cafés, carpenters union and trade union. Today, it has more than 20 trade unions and 40 labor union committees, including the First Union in the Middle East for domestic workers, the Committee on Migrant Workers, Public sector, education, farmers and others.

All other trade unions, employees, employees and their sectoral organizations in various Lebanese regions without discrimination shall be entitled to join the National Union after the approval of the majority of its members by the General Council.

The National Union organizes its conference periodically every four years, electing the executive office, and includes members of migrant workers and domestic workers. The percentage of women is 25% of the office.